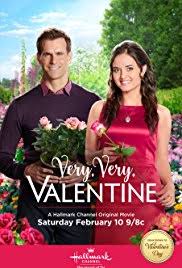 I’m watching this one with my son who has already declared that this can’t be good. So, here’s hoping he’s wrong! Very, Very, Valentine is the movie du jour.

Perennial Hallmark movie favorite Danica McKellar (See Crown for Christmas) is Helen, a florist in NYC, who works with her Aunt Carol in just the cutest floral shop in the city. But one more look at this shop and you know it’s not in any city in the state of New York. Her bff, Henry, has already entered her mystery rose (she cross-pollinates roses and creates new ones in her back room, as you do) into some kind of floral competition. Apparently it’s a big deal, (it’s the Super Bowl of Flower Breeding) and she’s nervous and exasperated the way every person is when someone does something for their own good. This mystery rose doesn’t have a name, so that’s going to come back up several times in this movie.

Because no Hallmark movie is complete without a party scene, Henry pops by with an invitation to a masquerade ball at the Botanical Gardens. Aunt Carol and Spunky ShopGirl help her overcome her fears about having to wear a fancy dress, and Helen is going to the ball. We also hear that Helen thinks ‘true love surprises you, like a bolt’ so obviously, Henry is NOT the guy for her, because they have known each other since college and are just friends.

These Botanical Gardens don’t look anything like the Botanical Gardens in NYC, but there are a ton of Christmas lights up and Helen looks very nice at this “Black and White Gala” but of course, she feels out of place. Her dress has the dumbest cap sleeves – just be a sleeveless dress already! She charmingly mistakes a handsome masked man for Henry and slinks away…he’s going to show up again! But now she found Henry, and why she doesn’t know that he’s in love with her is a mystery we’re going to spend the next 110 minutes figuring out.

At the silent auction of paintings, Handsome Masked Man (HMM) shows up to be charming and to bid on the painting that the music on the soundtrack told us that Helen really wants. (It’s impressionistic, and reminds her of her mom, who has passed on). She is being very adventurous and showing the HMM all about the flowers that are growing in the gardens. She refuses to tell HMM her name, though. (Meanwhile, Henry has been stuck talking to a potential investor, because the Botanical Gardens are in financial troubles, or something, so he’s missing all the Helen hijinks.) But mid-dance, HMM has to leave, like Cinderella at midnight.

FYI – Henry is Super NOT impressed that Helen met HMM. His face conveys a ton of sadness, but not as much as Helen’s face does when she finds out she didn’t win that painting.

OK for reals, her NYC floral shop has a lawn in front of it. THAT’S NOT A THING, PEOPLE.

Since HMM was wearing a boutonniere that she created (she knows because it was the mystery rose) she can track him down through credit card receipts, and before you can say, sure that makes sense, she’s out the door to see if she can track him down. She enlists Henry to help her, who is gung-ho into helping, because he’s deflecting his misery, and she’s chasing after every tall brown-haired guy she sees in the city.

Helen’s Aunt doesn’t understand why she’s running after a mystery man when she has a handsome BFF in the wings…but she plants the seeds of hmmm, maybe I do like Henry? in Helen’s mind.

Helen is having a ton of problems naming her mystery rose.  And Henry is having a lot of problems solving the financial issues of the Botanical Gardens. Looks like Henry is out of a job, and he’s now serving as Charles Bradfield’s wingman, helping plan their first date. It’s fine, don’t worry about Henry. He’s just going to go home, sit in the dark with no job, no girlfriend.

She finally named the rose! Crystal Valentine Rose – named after a sentimental story of Henry and Helen back from their college days. She invites Henry over for dinner – but as a group thing. And Henry just got Charles Bradfield a gift to give to Helen – a first edition of poetry by Emily Dickinson. This is just so sad! It’s like that episode of Friends when Chandler was in love with Joey’s girlfriend, and then he had to go live in a box. I can’t be the only one who remembers that, right?

My son thinks this movie is sooooo annoying.

Henry is burying his bad news because Helen is so happy. What a guy.

BUT! Spunky ShopGirl is starting to get the feels for Henry, which brings out the green-eyed Helen! (She sees Henry and ShopGirl having lunch together and is SUPER upset!) But ShopGirl is astute and calls Henry out for being in LOOOOVE with Helen. Duh.  Like, seriously, Duh.

Helen just found out that Charles Bradfield is brokering a deal to replace the Botanical Gardens with Condos. Philistine! But, Henry is forward thinking and DOES have a job, but it’s in Arizona, and he needs to start on Valentine’s Day. They are both feeling the sad times, because Helen is in LOOOOVE with Henry too, and he can’t just go away to Arizona!

It’s a MONTAGE of the Sad Times. Henry is packing, and Helen is making bouquets, all with the saddest of sad music playing.

Henry comes by on Feb 13th to say good-bye to Helen. They are both so sad. It’s the saddest of sads, because the movie still isn’t over and they can’t get together yet.

Helen doesn’t know if she made the right choice – she’s looking for a sign. Then she gets a delivery of the painting she wanted, and she thinks it’s from Charles Bradfield and it’s the SIGN. Because of course, the note with it isn’t signed. Why would it be? Because that would be the nice, normal, and sane thing to do?

Helen is working a wedding, and the bride’s grandfather is the angel investor Henry was trying to woo. Charles Bradfield is pissed that she is trying to mess up his deal, but she does her magic flower talk and gets the job done! And she also realizes that it just won’t work out with her and Charles Bradfield. He takes it surprisingly well.

(Oh, and Henry bought her the painting. ANOTHER DUH!) She calls him at the airport to tell him to stay, and he tells her he’s gonna call her as soon as he lands. She has major sad times that he’s still going to go to Arizona, but she gets a nice pep talk from her Aunt Carol. There’s a lot of backstory about her mom that is just not that important.

Last minute arrangement to be delivered to the Botanical Gardens…which still has all the Christmas tree lights up, and of COURSE Henry is there in a suit and tie waiting for her. And he proposes!!!!! (How did he manage to get from the airport to the Gardens, and buy a ring, all in the space of what is at the most 2 hours?) They haven’t even kissed yet and they are going to get married.

Oh, and her Crystal Valentine Rose wins that Super Bowl of Rose Breeding Contest. The End.

My son says this one was the worst one yet, and while I don’t necessarily agree, I can’t say that it was one of the best. While I know that these movies are predictable – I mean, that’s one of the reasons I love them, because unlike the box of Valentine’s chocolates, Forrest Gump, you ALWAYS know what you’re going to get with one of these films. However, that doesn’t mean I have to be tolerant of lazy writing, and I feel that this one had it in spades. So, don’t worry about Very, Very, Valentine. I watched it, just so you don’t have to.