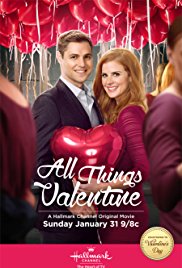 Confident Avery marches all around the city (supposed to be Portland, but is so Vancouver) to greet her boyfriend with V-day balloons, only to see that he’s cheating on her. So now guess who hates Valentine’s Day? She does have a nice Jack Russell Terrier who listens to her as she dispenses her dating wisdom. She’s called “The Coach” and she has a blog and advice column through The Portland Banner. Not as awesome as this cool-ass blog, but no one is perfect.

She argues with her editor who gives her an “All Things Valentine” column – we get it, she hates V-Day – but the editor won’t take no, and she has to do it, so put your big girl pants on and get to writing, Avery.

Avery has a very nice family with a cute nephew who likes Valentine’s Day. He’s not a good actor, but this kid is probably 6 so I’ll let him pass on by without commenting.

Our Hero, Brendan, (from A Royal New Year and I KNEW HE WASN’T BRITISH!) is at dinner with McKenna, the girl who wrote to the Coach for advice (Coach told her to dump him because he doesn’t like Valentine’s Day and she does) and She Breaks Up With Him with the Coach’s email on her phone. So now we know why our Hero Hates the Coach.

Brendan and his B-F-F have a heart-to-heart while they jog along the water and he decides to call out The Coach for her ‘bad advice.’ McKenna works at a bakery across the street from Brendan’s veterinarian practice, and McKenna is NOT showing her cool about the fact that Brendan doesn’t really give a crap about the fact she dumped him.

Avery’s Jack Russell Terrier Busby is not feeling great, and she goes to Brendan’s practice for help – even as he writes back snarky comments to The Coach. I don’t believe this guy is a vet. (I didn’t believe he was a prince in the last movie, either). But Avery thinks he’s a good vet, and I guess that’s all that matters. (Don’t worry about the dog – he just has a fever).

Avery paints the way all these characters in movies paints – random landscapes that are not very good.

Avery asks Brendan to go with her on a chocolate-making excursion. Nothing says Love like Chocolate. They learn how to fondue. It looks awesome. Now I want to fondue.  She’s doing that flirty thing where she tosses her hair a lot. Brendan is very receptive to it, and they make a second date.

Brendan is totally trolling her column like the biggest snark in snarktown. And she’s trolling him right back. First rule, don’t engage with trolls! (She even says that she’s involved with someone. YOU DON’T LET THEM IN, AVERY!) But apparently, everyone else loves the dialogue back and forth and the editor tells her to keep engaging.

He’s very struck by her painting. Don’t know why. But they like each other enough to make another date for the next day so he can pick out something for his mom.

They have another date, and Avery finds a new dress. It completely clashes with her hair. Come on, Costume Designer! She doesn’t buy it because she doesn’t know that Brendan will ask her out for V-Day – because they’ve both made a thing about hating the holiday.

McKenna is still stressing over Brendan, and B’s B-F-F Kit is in love with McKenna’s bakery partner Prue. That’s a whole other movie going on that apparently we don’t care that much about.

Brendan and Avery are growing closer and closer, and “The Coach” and her nemesis are growing more and more antagonistic. In the meantime, Brendan goes to see McKenna to do something…dumb, because after swearing to McKenna he didn’t want to have a date on V-Day, he confesses he has a date on V-Day with Avery. There’s no win here.

But she does want to hold hands with Brendan. Awww.

McKenna is super annoyed that Brendan is already dating someone else, so you know she’s gonna make trouble. McKenna is a brunette, and you all know that they are evil in the world of most Hallmark movies.

So in the space of this movie, Avery and Brendan have progressed to him meeting her family at a potluck. And everyone loves him. But the countdown to unmask the Coach and her Troll is upon us! (Although now, the Troll wants to apologize because the Coach was right!)  But Brendan just canNOT deal with the fact that the Coach is Avery and he doesn’t come forward as the Troll.

McKenna shows up at the paper to tell Avery that Brendan is the Troll. So now we have a showdown at the vet’s place! Actor playing Brendan loves to stand there with his mouth hanging open. She breaks up with him. But honestly, anything he says whilst trolling is so not bad, so her ‘betrayal’ is just way too dramatic for this damn story.

Brendan has a lot of time to be on the internets in his busy vet practice. Just saying. They are both feeling the sad times, as my son would say. But in her depression, Avery does take up all the space on her bed, not like those jokers in In My Dreams, so good for you, Avery.

She also gets a pep talk from her very sweet dad. Awww. Love Dads. She embraces Valentine’s Day and showing love for all mankind, not just Brendan-kind and all the garish pink and red decorations and candy it has to offer and then has a heart-to-heart with McKenna, who gives the Coach advice! Meanwhile, Brendan and his friend Kit basically say the same thing to each other, all so we can get to the end of this movie.

Brendan shows up at her house and she’s wearing the red dress that clashes with her hair. Finally they kiss and then go dancing at a Mexican restaurant. As you do. (They are slow dancing while they are surrounded by everyone else doing the merengue.

So, yes, I did see this last year. And with this movie, I need to reexamine my thoughts on V-Day. Do I hate it? With three lovely boys in my life, there’s no way I hate a day when I can shower them with love and eat candy without feeling guilty. I get why people say they do, though, and so if it’s not your cup of tea, you  better stay the hell away from the Hallmark Channel, and from movies like this. But if you’re ambivalent, or if you just can’t be bothered, I’ll watch it, just so you don’t have to.