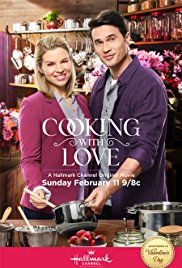 Not to be confused with A Recipe for Love, A Dash of Love, and a whole plethora of cooking-related love stories, this is Cooking with Love. Which apparently everyone does, right? That’s what I do when I’m making burgers and fries for dinner. It’s with love.

This particular morsel of Hallmark-i-ness centers around a TV show called The Little Gourmet which is like that Gordon Ramsey kid show that I don’t watch. Not because I hate Gordon Ramsey (he calls people donkeys, and it’s kind of funny) but seriously, who are these preternaturally astute children who talk about sous-vide and compound butters? What planet do they live on, because I sure as hell don’t ever want to go to there. Anyway, as we start, Kelly is our perky blonde producer of this show, in a pickle because a) her mentor and executive producer Amanda is leaving the show, (leaving a job opening to be decided by the end of the film) and b) Chef Betty, the very nice old lady who has been the host of this show for 4 years just threw her back out and cannot stand up. The network comes in with a Douche with a capital D named Jeremy, a “rising star” who is going to share the producers credit with Kelly during this season, to assist with all the issues that pop up.

First things first, they need a new chef host. Kelly’s idea is Steven Harris (note, it could be Stephen, but I don’t believe in that spelling), a temperamental chef with an image problem – a video of him spilling food on a food critic went viral. But the show needs some good publicity, so they all decide to work together. It’s going to be awesome, right?

Starts off with a hard no, as Steven won’t wear the chef toque (which is pronounced toock, not toe-que). Kelly tries to get him to see reason, but he runs to Jeremy and gets his own way. Then he pitches a fit because he has to have the kids make sloppy joes and how DARE you ask a 2-Michelin-Star-Rated-Chef to cook sloppy joes! If this show is indeed called The Little Gourmet I kind of am on Steven’s side here – sloppy joes are great, but gourmet, they ain’t.  But all of this leads to cute banter as they decide he’ll get input on the menu.

They go to a farmer’s market, and he pushes radicchio on her, which she vetoes, but he gets around her anyway and voila, radicchio is on the show.  They have more back and forth banter – but then he sees her nurture the kids backstage and gets all sappy. Turns out, she’s got a plethora of ideas on how to make the show more interesting, all written down in her trusty notebook. She pitches a few, and Amanda loves them, so they are off to a firehouse to do a chili cook off. Isn’t that a cliche that firemen eat a lot of chili?

At the firehouse, however, jealousy rears its ugly head for the first time, as Kelly is sweet-talked by Fireman Someone (forgot his name) and Steven Harris doesn’t like that, not one little bit! This segment goes off without a hitch – so when it’s DoucheJeremy’s turn to produce something, of course it goes off like crap, and Steven misses Kelly.

He misses her so much he ends up back at the TV studio in time to veto her dinner of take-out pizza. WHO VETOES PIZZA? Pretentious 2-Michelin-Star-Chefs, apparently, because he insists that they make the pizza together, instead of enjoying something that someone else obviously took the time and energy to create. Thou Shalt Not Insult Pizza, Chef Steven Harris. But through this impromptu cooking lesson, we get the softer side of Chef Steven, and then we get the old “there’s flour on your face, let me get that” move where he then has to caress her face with his hands. The music tells you that this is a MOMENT but it is interrupted by DoucheJeremy…and then he steals Kelly’s notebook with all her good ideas in it!!!

Through this whole thing, Kelly has a Best Friend (Not a Sassy Friend, fyi) who does all the Friend things necessary in one of these movies.  Encourages her to get out there and start dating. Tells her to submit her good ideas and not waste them. Gets her ready for her big date with Steven – because he’s asked her to his restaurant on Valentine’s Day, and he prepares a chef’s tasting menu for her which he makes her eat alone for the most part. But whatever, he’s working. It’s here we get backstory on Kelly – her mom was a Social Worker, and when she died, she got all these cards from previously helped children who said thank you. Kelly just wants her life to have meaning – and of course, meaning in a TV cooking reality show is the way she went to find it.

Both of them protest so much about it not being a date that it’s totally a date.

Plans are underway for the Season Finale (that was fast). Kelly’s idea is “Farm-to-Table” and Amanda loves it, and DoucheJeremy is seething with annoyance. You can almost see him stroke his invisible bad-guy mustache while he plots.

Steven meets one of the cheftestants at his own personal favorite farmer’s market, and he helps her out. I think that is a clear conflict of interest and violation of the no fraternization rules that I believe are standard on any game show. When I was on Jeopardy, we weren’t allowed to talk to Alex until everything was finished. I didn’t win. He called me ‘young lady.’ Oh well. But this whole interlude was meant to tell us that Chef Steven is really a nice guy – the music in the background tells us so!

Kelly is not as upset about missing her notebook as I would be at this stage of the movie, but don’t worry, it’ll show up again. Instead, she’s vetoing her Healthy Choice microwaveable dinner in favor of heading out, buying groceries, all so she can make one serving of spaghetti and meatballs. But as her grocery bag did not carry one baguette, I call shenanigans on this romantic movie – don’t they know that all heroines need baguettes? Anyway, she also is set to eat her spaghetti dinner on her couch, without a napkin. Say goodbye to that nice pristine button-down you’re wearing Kelly, that’s a mess just waiting to happen.

Almost the end of the show – Chef Betty is back with her back pain all fixed…and Steven got offered a show in LA, so it looks like everything is coming up roses, right? Even Kelly is finally throwing down the gauntlet and saying that she should be the next Executive Producer of this show when Amanda leaves, not DoucheJeremy. Kelly and Steven have a wistful good-bye, good luck scene, which leads right into DoucheJeremy pitching all of Kelly’s ideas to Amanda, big network boss, and Chef Betty…and Kelly doesn’t say anything in the meeting! It’s like that scene in Working Girl, where Melanie Griffith doesn’t think anyone would listen to her against Sigourney Weaver. But in reality, Kelly should TOTALLY have spoken up in that meeting, and it is annoying as hell that she didn’t. Ugh.

She does manage to confront Jeremy by himself, accusing him of stealing, and he’s so icky. “If you had those ideas, maybe you should have shared them sooner,” he says, while being overhead being a dick by nice unnamed PA. That’ll come up again!

Kelly and Steven both have some more wistful moments as we wind down the clock on this one. She gets a Hallmark card (way-to-tie-in!) from a former contestant to say thank you, and he realizes that his heart isn’t in to going to LA and filming his own show.

And before you know it, sad times are over and it’s time for the finale of this cooking show that we never really saw any cooking being done. Steven shows up to give Kelly a promise that any cheftestant from the show can go apprentice at his restaurant if they want to, once they graduate culinary school. Aww.  And JUST as he’s getting in his cab, what do you know, Chef Betty throws her back out on Live TV, leading the way back in for Steven to finish out the show.

The rest of this moves pretty quickly. Little Chef Becca wins, but not before she shows great sportsmanship and shares her chocolate with her competitor (everyone say all together now, AWWWWW). Amanda gets DoucheJeremy fired by showing Kelly’s notebook that the unnamed PA found in Jeremy’s thing. Kelly gets the job executive producing The Little Gourmet. And Steven turns down his show in LA, because he could have said good-bye to NY, but he couldn’t have said good-bye to her. And The End.

Actress playing Kelly did a lot of smiling without showing teeth, which I think is off-putting. Actor playing Steven…I didn’t believe for one second that he knew how to cook. But it didn’t matter, because they are cute together, and ended up together at the end of the movie. Now I’m in the mood for pizza, but I can’t have any right now. I can still watch these films, though, just so you don’t have to.

One thought on “#33 Cooking with Love”