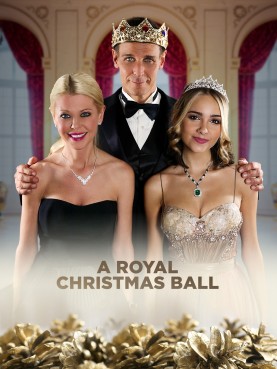 Words cannot express how excited I am to get into this one.  From the Ion Channel, as you can see it stars Sharknado star and one of the worst actresses I’ve ever seen, Tara Reid, and the guy who was on General Hospital back when I watched that show. He hasn’t aged that well.

We start with B-roll of Los Angeles. Do these movies actually film all this B-roll, or is there a stock footage house where they can get it at cost? I can’t see the budget springing for a helicopter to do all of these overhead shots.

The first real shot is the girl on the right of the poster, in her tiara, looking in the mirror. And my son says, “Is she, like, a princess, or is she like you and just wears a crown whenever she feels like it?”

Her name is Lily, and her tiara is from Homecoming. She’s the 17-year-old daughter of Tara Reid, who are now Christmas Tree shopping. Tara Reid has a broken pinky finger. Is that relevant, or just something that happened that they then have to explain away, like Shia LeBeouf in Transformers 2?   They are decorating a tree that is so clearly fake – even when they just went shopping for a real one. Set designer, what the hell? Continuity!

Finally, a Baltic-sounding country with an actual Slavic accent! (Country is called Baltania…wow. There’s so much imagination there!) Turns out, King Charles is a widower of 1 year, headed to Los Angeles for investor meetings – and he was there 17 years ago when he was at university. Methinks that will be important! He looks longingly at grainy pictures of himself at Tara Reid’s character, which begs the question, who was there taking the pictures?

The King and his entourage end up at the Hotel del Coronado, which is called the Luxury Seaside Hotel. Whatever. It’s a gorgeous hotel. I want to go to there.

Lily is like Amanda Bynes from What a Girl Wants – she doesn’t have a dad and wants to know who he is. Gee. Who is he?

King Charles googles Allison Brooks – who I guess is Tara Reid. Don’t you think he could have googled her when he was back home – why wait until he’s in California? Apparently Tara Reid is an architect who wears a blazer without sleeves. WTF costume designer? She also has a sassy (i.e. African American) best friend who tells her she needs to get out more. Is there a rule that all of these movies need to have this friend?

Oh, Charles just showed up at Allison’s office! Unannounced! She’s not pleased. She knew he was a prince back in the day, and she was not happy about being lied to.  And King Charles’s fake Slavic accent is utter crap.

Almost every scene change in this movie starts with a book opening and a magic sound. It’s.getting.old.

Lily sees King Charles leave her mom’s office and Tara Reid is totally freaking her daughter out. Tara Reid should give lessons on how to badly act. It’s amazingly bad. Why does she still get hired?

I refuse to believe that such a beautiful place as the Hotel del Coronado (or the Luxury Seaside Hotel) would decorate suites with such tacky fake trees, and then not put a tree skirt under them. Dude, they’re not hard to make – those bare legs look awful.  Bitchy woman is chewing the king out for going to see Tara Reid. Why the hell is this woman so in charge? But King Chuck calls her out on the fact that the letters never made it to Tara.  But then bitchy woman totally paraphrases Spider-Man. “Great privilege comes with great responsibility.” Really, writers?

Oh, in a twist, Charles also has a sassy best friend from college! I think Tara’s sassy friend and Charles’ sassy friend Sam are going to hook up by the end of the movie.

One of the Slavic bodyguards is clearly Australian.

Bitchy woman in charge totally sabotaged their relationship 17 years ago.  So Charles married Duchess Paula, but he was always thinking of Tara Reid – who I refuse to call by her character’s name. And Tara Reid never told Charles that she was pregnant. This is so What a Girl Wants, but without any of the charm, or Colin Firth.

Lily crashes the Luxury Seaside Hotel and finds her dad, but chickens out before telling him he’s her dad, and gets totally blocked by bitchy woman in charge.

Apparently King Charles is in a major suite at the hotel, but he very clearly comes out of a ballroom on the main floor down the hall from the lobby. He and best friend Sam crash Tara Reid’s work party – how did they know where it was? But both best friends are so clearly smitten with each other right now! But paparazzi have shown up at the party – who just take pictures on their iPhones. Don’t paparazzi have actual cameras? And how does the fact that a minor royal of a nowhere country crashing a party make the evening news?

We’re now subjected to a quick recap of the entire movie in montage form. Did the movie just feel a little light?

So Tara Reid comes home in the morning to her “You Lied To Me, Mom” Daughter, but there’s a family reunion in the driveway, and now suddenly it’s night and they’re still having the conversation about how much they didn’t mean to hurt each other. That’s a whole day of that conversation. I hope they had cookies. Or wine.

Bitchy woman in charge just showed up at Tara Reid’s house. She’s.So.Not.Happy. And she knew all about Lily, for all these years. Seriously, King Charles, fire this bitch. But he’s magnanimous in his family victory, and she gets to keep her job. I would have kicked her out the door with my heaviest boot.

In the final commercial break, it’s the ASPCA commercial with the Sarah McLaughlin song. Oy.

Lily is wearing a better tiara than her homecoming one at the royal palace. And Tara Reid is wearing the ugliest.dress.ever. It looks like ruffles threw up on her skirt. She and King Charles have a heart to heart in front of a greenscreen picture of the Alps. It’s weird. Ew, that kiss looked gross.

The royal decorators don’t know about tree skirts, either.

There’s a lot of talk about the Baltania constitution, about how it doesn’t allow for commoners to be in the royal family. King Charles asks them to make a change to the constitution and everyone applauds. I don’t think that’s how people make changes to constitution. At least, I hope not.

Father daughter dance – awww. But now Tara Reid gets to dance in her craptastic gown. They are dancing so awkwardly. Stand up straight, Tara Reid!

And the end. Apparently they lived happily ever after. Oh dear lord, this one was hard. But I will gladly do it, just so you don’t have to.