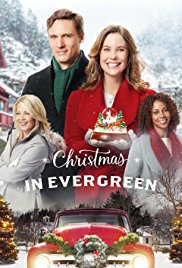 Sometimes, you need an escape from the crazypants world we live in, and an escape into a  Christmas movie that is the equivalent of a cup of hot chocolate with some of those awesome marshmallows that they sell at Williams Sonoma is as good a thing as any.  Today, we have just such an entry: Christmas in Evergreen, starring Ashley Williams and the guy who played “Zoom” on CW’s The Flash.

From the movie marketing image, two other things also compete for above the title listings:  a magic snowglobe, and a big-ass red truck. And Holly Robinson Peete, playing the frazzled best friend – and her subplot is super lame. The blond lady in the picture is Ashley Williams’ character’s mother. I don’t think she ever gets a name. Not sure why she needs to be on the poster.

Ally is a vet in the small town of Evergreen, Vermont. She’s set to leave her practice, and her life, and move to Washington, DC, to “take things slow” with her boyfriend Spencer – henceforth to be called “guy with massive jaw” – he has a very pronounced chin. They have a phone call, where Spencer dangles the thought of Christmas in the Hamptons…they could take a helicopter from DC to Long Island.  Because that is the only way anyone will be able to make that journey in a timely fashion in reality.   She’s driving the red truck of the poster, and even though there is picturesque snow flurrying all over the place, and even though it’s Vermont, in December, she drives with the windows open.

Cut to Ryan Bellamy, widower, with daughter Zoey, who are driving to the airport to take a cruise around Florida for Christmas. They take a pit stop in Evergreen because kids be hungry during car trips. And here we have the usual glory of small towns that these movies delight in.

I have never lived in this type of small town, where everyone seems to know everyone’s business, and everyone seems to get along. And where the entire town bands together for something called a Christmas Festival. Or when there’s always something, like a candlelight vigil in the town square. I kind of have a deep-seeded longing to live in one of these, just for a week or so, which is the magical timeframe of a 96 minute movie.  Just to see what it’s like.

Ally and Ryan meet cute in the picturesque street, and she still tries to start her big-ass red truck, which I guess doesn’t want to go to DC, because it acts all temperamental most of the time. Anyway – Zoey, the daughter, doesn’t want to go to Florida. She wishes on the magic snowglobe to stay in Evergreen, VT for Christmas. Apparently her mother died last Christmas, and Ryan the dad thinks a change of scene is what is necessary to banish bad memories. He’s a doctor, but probably not a psychologist, or he’d know that memories follow you wherever you go, and you can be sad in the sun just as easily in the snow.

A lot of airport delays later, they are back in Evergreen, and let the holiday fun commence.  In the days leading up to Christmas, they:

In passing, what’s up with all the stuff before Christmas?  Who celebrates the week before?  It’s like saying that the 12 days of Christmas end on December 25 – that’s when they actually start, people!

Long story short – Guy with Massive Jaw shows up at Ally’s house (he took a helicopter from DC to Vermont!) because he wants to be with Ally, but she doesn’t seem that jazzed to see him at all. And if they’re dating, she’s pretty quick to make him go stay at the local inn – I mean, she has a house, I’m assuming it’s more than a one-bedroom – the guy could have at least stayed on her couch. He came all that way, by helicopter! Maybe this is the Vermont way of taking things slow.

A lot of soul-searching, and weather issues later – it seems there’s a perpetual flurry in this town – Ally sends Guy with Massive Jaw back to DC because she wants to stay in her small town. She actually says “Everything I needed was right here, all along,” which leads me to believe she just watched The Wizard of Oz.

Ryan tries to tell Ally he likes her but chickens out and retreats to the airport, where he finds out that Ally told Guy with Massive Jaw good-bye, and so…Ryan and Zoey head back to Evergreen in a taxi, because even though Ally let Ryan drive her truck all around town, there are some limits to that generosity, I guess.

At the Christmas Festival, in a conveniently vacant brand new barn, all is smiles and glitter. Ryan and Zoey show up, and Ryan decides to uproot his (assuming) thriving medical practice to be the Evergreen town doctor. Kiss in the snow, and one last shot of a family eating a big turkey, and we’re done.

I did fast-forward to a lot of the commercials, but I did catch one for Weathertec liners – the perfect Christmas gift. If my darling husband bought me car liners for Christmas, we’d be having words.

So – Christmas in Evergreen, you did leave me with a desire to walk around a small town with hot chocolate and a song in my heart, so I guess you did your job.  I’m glad I watched it, even if it was just so you don’t have to.

One thought on “#6 Christmas in Evergreen”