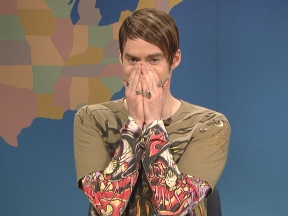 I feel like Stefon from SNL – this movie has everything: small towns, broken hearts, the little girl who is just little enough to not mind her dad kissing someone else, the Sassy Friend, the great hair, the arbitrary decision that the heroine has to make by the end of the movie, and TONS of miscommunication and loving, angsty looks. It’s called Portrait of Love, and it stars Jason Dohring, the tall drink of water from Veronica Mars (and a lot more than I thought, after I just checked his IMDb page!) Corbin Bernson playing an annoying, barking agent, Frances Fisher, playing a nicer version her bitch mom character from Titanic, and some girl with good hair. Let’s dive in!

Heroine April Littleton is a high-end fashion photographer who’s bored with her life of shooting bored looking models. She has a job opportunity provided by barking Corbin Bernson, 2 years in Paris, shooting high fashion for some big fashion house. But her heart’s not in it. So she jumps at the chance provided by Sassy Friend Julia, the mayor’s wife of their small town. Small town is having a Centennial (Of course it is) and to raise money, they’re going to auction off some of April’s prints.

There is also an art contest at this Centennial, which hero Luke Dwyer is being pressured to enter by his mom. Luke used to be an artist, but now he makes furniture. His daughter, Jessie, just wants him to make art and be happy. She wears one single side-braid on top of the rest of her hair, and it’s such a weird hairstyle, I feel compelled to comment on it.

As the story gets going, Grandma takes Jessie into town and just leaves her in the care of the nice soda shop owner, as she has to go to a meeting. She didn’t ask, she just dropped her off, not even waiting for her son and Jessie’s father to show up. I call highly-suspect parenting, or is it the magic of small towns? Honestly, it’s a toss up. But this gives us the added benefit of Luke seeing April when he does show up – and we find out that a) they are still attracted to each other, b) she’s super pissed that he didn’t follow her to art school, c) he likes his small town, and d) she does too, but also thinks there’s life beyond Grovers’ Corners, or whatever the name of this town is. We also find out that his wife died, and she feels awful (later) that she didn’t offer condolences.

Sassy Friend is going to play matchmaker, and so is Daughter Jessie – as Daddy needs a MUSE, you know! He’s currently stuck in the artist’s version of writer’s block, and she must get him out of it or die trying!

April goes walking in the woods and takes a lot of photos, so there’s the movie trope of seeing through her lens. She also manages to stumble onto an Old Lady Welder Artist, much like Aunt May in Twister, but without the danger of her house falling over. The only other person of note in this town is Ben, the gallery owner/artist who, after hearing from April that she and Luke are not warming up old soup, pushes in to make some new soup with her ASAP. You would think that there are no other single ladies in this town, the way he moves in so fast. It’s kind of gross.

April’s all inspired by local artists to take their pictures, and making art, blah blah blah, lots of art talk. Montage of art, coinciding with barrage of voice mails from Corbin Bernson barking at her to accept the job in Paris already! Finally, this project is almost done – just one more artist to photograph – and it’s Luke. Cue 1960s soap opera organ music!

Jessie is WAY too excited to meet April – ‘You’re my dad’s muse, he needs you.’ It’s a lot, and this child actress isn’t that great, so you are just left with a feeling of “We GET it, Jessie!” Unfortunately, Luke has no art for April to photograph him making, and they are still very angst-ridden, so she leaves, sans photographs, and has her date with Ben, where all they are shown doing is talking about Luke. This serves to tell the audience that Luke stopped sculpting after April left town, as if we didn’t know that already.

This fact is brought home even more by the heart-to-heart that Luke has with his mom, she thought he put sculpting away as it was a childish thing to put away, like action figures and pretending to be a super hero. She didn’t realize that he couldn’t sculpt without April there. It also comes out that his wife Maggie was “easier” for him. I don’t think that’s a glowing recommendation, right? They never come out and say how she died, but I’m guessing cancer, or that heart disease Barbara Hershey had in Beaches. But I digress.

Through the tenacity of Jessie, and the fact that this entire town can’t say no to this child, April is helping Luke with his project. Just go with it, you need them to spend time together for all those angsty looks! They brainstorm by having a “Sticky Note Brainstorm” because they can’t say Post-It(R) because it’s trademarked. They end up looking like this:

Sassy Friend isn’t being that helpful, but April wonders aloud if she hurt Luke the same way Luke hurt her. She’s never had a real relationship since him, because men, right, they’re all the same. But Are They? We find out that Luke didn’t follow April to art school not because he wanted to stay in this little tiny town, but because he didn’t think he was good enough to be an artist, so he SETTLED into a life of making furniture, and while he was happy with his dead wife, he still settled. That’s gonna be some awkward conversations when they meet up again in heaven!

Off on another brainstorming idea, they go bike-riding. Do you have to put bike riding on your acting resume, to prove that you know how? Just wondering. They end up at a big old tree, and voila! They decide that they should sculpt the tree out of wire, and metal, and copper, and WHO IS GOING TO PAY FOR THOSE MATERIALS???

So now, another creative montage, where they get dirty, and have longing glances and oh! their hands touch over the branches. Sigh.  Through it all, Jessie is just shout-acting.

We keep cutting to Corbin Bernson barking about Paris, because I guess they feel he’s a name and he needs to be in more scenes. He begs for sushi at one point. Not important.

Jessie is now struggling to draw something. April shows her and literally draws 2 freaking straight lines and Jessie says, “Wow, you draw really good.” You can tell that all from 2 lines? In order to inspire Jessie, they go on a walk and take one picture for every letter in the alphabet, which actually sounds like a fun thing to do and I’m totally stealing this idea for my next vacation.

The next set piece is the art auction of April’s photographs. Ben is taking her, and a) she gets ready at Luke’s house, b) Ben picks her up from there, and c) April invites him into Luke’s house! All three of these things make my eye twitch. And Mom gives Luke a shove and he heads out the door to stake his claim, or whatever. While there, he gets a pep-talk from Stan the Diner guy, fulfilling all of the mystical African-American stereotypes possible by giving advice to lovelorn attractive Caucasian people. I am very annoyed at this movie. But they talk about milkshakes a lot, and now I want one. April and Luke have a heart to heart (she tells him about Paris) and they almost kiss but are interrupted by Ben. BEN! TIMING!

Jessie still doesn’t know what to draw (although we never know why she feels the need to draw something – it’s not like it’s for school, as I don’t think this kid goes to school  – that or, it’s summer, pick one) and April helps her reminisce about her Mom, and she decides that because Mom would hum while she worked, Jessie must also hum. It’s too……too…..much. But the good feelings last while April and Luke are working, because finally they get to kiss for like 2 seconds, only to be interrupted by his mom. Like they’re 14.

Finally we get a scene between April and Sassy Friend where they talk about feelings and April says the kiss was pretty great. It was for 2 seconds. If that is your idea of a pretty great kiss, April, (say it with me) girl, you gotta get out more!

Luke finds Jessie working on her drawing in the dark for some reason, and Jessie is clearly having some kind of attachment issues because now she wants to be like April, and is imagining April in their life for ever and ever and Seriously, Why Isn’t This Girl in Therapy? But Luke is now questioning kissing April, because what’s he gonna do if April leaves again, and then Jessie will be heartbroken!!!  So he is distant with April the next day and they finally, FINALLY have it out. He didn’t go to art school because he didn’t want to disappoint her if he sucked at it, and SHE…got mad at him for abandoning their dream? AND she loved him? They are both very emotional. Cue the sad times, April has to go to Paris, and Luke wrecks their tree sculpture.

Sassy Friend rightly calls her out on the Paris move, as it’s just running away. Before she can head out the door, though, Jessie arrives in tears (THERAPY) telling her that Luke broke the tree and she has to help fix it – the contest is tomorrow! So, April agrees to help. They fix the tree without talking with each other. 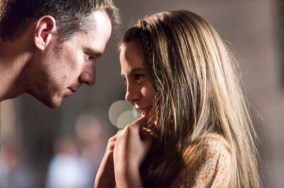 Luke finally sees Jessie’s drawing, and it’s a nice tribute to her mom. Give props to Jason Dohring, he does a great man cry where all you want to do is give him a hug. And just like that, he’s out the door to track down April.

In a twist, though, he doesn’t beg her to say with him in Tiny Town USA, he says he’ll go with her to Paris, or Rome, or wherever she has to go. But, you guys, all SHE wanted was to know that he wanted HER, and now she’ll give up this 2 Year Paris Dream Job to live in Tiny Town and be a family with Luke and Jess.

Oh, and their tree wins, and the end.

Ok. I have made fun of this movie enough. It was like a smorgasbord of everything we love (and love to hate) about Hallmark movies. I have several more on my DVR that are just waiting for me to watch, which I will, just so you don’t have to.