So in honor of the fact that spring has finally come to the East Coast, as witnessed by the budding trees and the allergies that are pervading my house, we’re looking at a brand-new entry into the Hallmark movie genre – Home by Spring, starring the guy who was Jeremy Gilbert on The Vampire Diaries, and some girl. Opening credits show Louisiana and it’s super green, and we meet brunette main character Loretta, who is organizing an event, is very judgy about her mom’s floral arranging abilities, and has to break the news to Wayne. What news? Who’s Wayne?

Wayne is brunette (brunet? brun? 6 years of French and what’s the masculine of that word?) Jeremy Gilbert, who owns the SunDown Inn, and whose own sassy friend has already told him to put a ring on Loretta’s finger. But Loretta has a choice to make – work in her own home town as a small-time event planner, or move to Los Angeles and work for a big-shot event planner. She chose LA and Wayne is super pissed – he was gonna work on the barn in the winter and put in a bar. Guess that won’t happen now!

Cut to 2 years later – Loretta’s boss needs to choose a new lead planner, and Loretta wants the job. She also is ducking calls from her mom, who wants her to come home for the Spring Festival (because of COURSE there is a Spring Festival) but first, Loretta has to manage an 8 year old’s Birthday Party, where, OF COURSE, she is mistaken for her boss by some eager couple, and is going to run with it, even though her ruse is so paper thin it’ll get shredded in 2 seconds.

She has an actor boyfriend who is super encouraging about masquerading as her boss, but who then gets sidetracked by the amazing brunch menu at the restaurant where they meet up. And then, as her boss has just hired a new lead planner named Elizabeth, Loretta says F#@! this S#@! and goes to the meeting as her boss – which is a weird meeting to make this guy named Paul look better in front of his prospective father-in-law – Paul has to look all outdoorsy and butch. To give her credit, she does keep trying to tell the truth, but this actress’s voice and mannerisms are so apathetic, it’s not like she’s trying too hard.

So off Loretta goes to her home town, as that Sundown Inn is probably what’s in her mind. And let me tell you, if you stack actor boyfriend against Wayne the Innkeeper ex-boyfriend, it’s Wayne every time. But I guess you’ve already figured that out, given Jeremy Gilbert’s name above the title, and actor boyfriend as a “featured player” is a guy I know I’ve seen before, but I don’t care enough to Imbd. 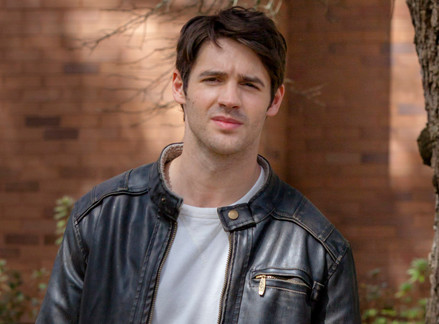 Mom is not thrilled about the lies, and of course the Inn is in financial difficulties, so Wayne will go for this scheme and DAMN Jeremy Gilbert looks nice in a leather jacket. I will say that I hate the name Wayne.

There is a lot of Spanish moss on this movie set.

Wayne is still being pissy – he doesn’t see the need to leave his small town, and he’s passive aggressively taunting Loretta about leaving, and about her mechanic skills. She fixes a car in a white cardigan and I’m impressed by her not-getting-grease-on-her-shirt skills. And since his pick-up truck is fixed, of COURSE they have to go for a drive through the countryside – without roads. They are rebels in Louisiana and have to drive on the grass. Wayne also tries to get Loretta to slow down and take a minute to realize that the hometown pull is amazing and she needs to leave LA and live in the country, and she’s like, nah, not feeling it quite yet, and I have quite a lot of work to do right now, so let’s go.

Wayne’s sassy friend is named Turner, and he’s all “great to have you back, Loretta” and shes like “I’m not back, I’m seeing someone,” and Turner gives her that “yeah, whatever” look.

Oh SNAP! On a routine look for some nails in the barn, she finds the engagement ring that he never gave her in his toolbox!!!!!!!

Guests have arrived – Arthur Wellerson is not impressed with his prospective son-in-law yet, and Paul is the Man in the Yellow Suit in the Curious George movie – he bought everything as he was told and is way too uncomfortable in the outdoors from the get-go. My husband is watching with me – he is very unimpressed, whether by Paul’s ensemble, Loretta’s apathy, Wayne’s southern drawl that is just natural enough not to get annoying, or the movie in general – I’m not sure. I’m guessing option all of them. And Wayne is totally being a dick about Paul’s lack of out-doorsiness and is taking them on an off-road adventure, which Arthur loves, and Paul picks up on the sparks between Loretta and Wayne, and oh my goodness, Loretta’s mom made SPAM sausage for dinner. I didn’t know that was a thing.

Loretta has some soul-searching to do on the lawn, looking at the stars. You know she’s confused because of the guitar music. 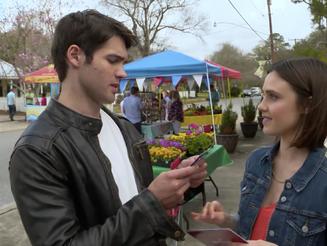 I do like Tucker, the Sassy Friend. He is telling Wayne that it doesn’t matter if you leave home, as long as you come home. Why is this such a big lesson to learn in this movie?

And now we’re off to the Spring Festival, which looks like a block party. It’s to give Loretta a glimpse of how great it is to be in St. Francisville, Louisiana. It’s very transparent, and she’s eating it up with a spoon.  So much so that she ducks actor boyfriend’s call to bond with Wayne over a stall of flowers. They meet some hippie savant guy who remembers everyone’s cars, and who apparently now has a plane. Remember this throwaway scene.

Paul sucks at being outside.

Wayne wisely says that Paul should be himself, and not try to be Paul Bunyan, and he’d get farther with Arthur. Wayne also has some folk-wisdom about untangling fishing line – and Loretta lays it out that she found the engagement ring. He didn’t want to make her have to choose between a job and him, plus he was waiting for the right moment, and he never felt it came, but it doesn’t matter anyway, and then she says she needs to come clean about not being her boss. (How did that conversation go in the writer’s head? Because I just wrote the synopsis and I don’t get it.) But! before she can do that, Paul finds out that she’s not her boss, she’s Loretta, and he’s PISSED, but he says keep it up so he doesn’t look like an idiot. Not sure the lie is what’s doing that for Paul, but whatever.

They go wood-pecker tracking in the woods. Paul is super thrilled about his super-hearing – he hears one! He will not be denied! He finds the woodpecker! Arthur is super impressed! Seriously, why do I care?

Oh man, ACTOR BOYFRIEND showed up! His name is Howard.  WHAT is up with the names of the guys in this movie??!?!?!?! And Wayne is not happy that she has not told him about this boyfriend, who insists on playing a role just as she is playing a role and is doing an affected British Accent and is such a tool that I think he needs to go live in the barn.

Wayne – as an outdoorsman – throwing a lit match pissily into the fire is NOT the way to light the bonfire.

Arthur gets the guitar out and they have a bonfire sing-a-long. He’s overheard that Paul would do anything for Arthur’s daughter, and heard Loretta say that Paul shouldn’t wait for the right moment – which is something she’s been wasting this whole movie doing. Practice what you preach, Loretta.

The sing-a-long results in a lot of painful anguished glances and close ups of the camera. AND snap! ACTOR BOYFRIEND just co-opted Paul’s perfect moment to ask Arthur for his blessing to marry his daughter, to propose to Loretta and Wayne has to run away in anger. Loretta doesn’t say yes, and after the commercial break, he’s ok with the fact that they are broken up and bye-bye Howard. You sucked.

Loretta’s mom does some kind of passive-aggressive speech about the fact that she thinks that her daughter just got engaged to a guy she doesn’t know, and then Loretta can’t hold it in any more, and confesses and Arthur doesn’t take it at all well, and JESUS Loretta, speak up and say something to Arthur to make it better but you just stare off into space. Wayne tells her to fix it, she’s got to improvise, and that’s not her strong suit, you guys. But she gets an idea, and has to bring in the hippie car guy from earlier to fly Arthur’s daughter in from LA. Thank you, Chekov’s gun.

Arthur blesses the union of Paul and Michelle. Huzzah!

Loretta’s boss is not thrilled with the whole deception thing, but Loretta is NOT fired – because Loretta just needed to push off into unchartered waters, and now that she has, she’s fabulous, and now she’s LEAD PLANNER! Why do all jobs work like this in Hallmark movies?? THIS IS NOT A THING IN REALITY, PEOPLE.

Loretta is matching her eye shadow to her neon pink blouse. Not a look that should have resurfaced after 1987. Wayne lets her go, and she drives away. WAYNE! What is up with you? You have 10 minutes left, buddy. You better get the girl.

After final commercial break, Wayne gets a heart-to-heart from Arthur about the fact that you never lose track of home if you have love in your heart. Oh for GOD’s SAKE. The moral of these movies literally comes from the inside of a Hallmark card. He also tells him that Loretta is something special, even if she lied to him for the entire weekend. Sure, Arthur, that’s what makes you special.

Boss Lady gives Loretta a primo-gig planning a Ball – because of course there’s a Ball – and Loretta is not as thrilled as she should be – because she’s in love with Wayne, who has just shown up at her doorstep. The man who wouldn’t leave his hometown has gotten on a plane! He’s crazy about her, and he just had to tell her how he feels.

Loretta quit her job – and she has no plan – and all she knows is she wants to come home and be with Wayne. And cue Kiss and Jazzy Music, and aerial shots of Louisiana, and Paul and Michelle’s wedding is at the Sundown Inn. But the movie’s not over, because Wayne has to take a sundown walk on a pier with Loretta to propose. Man this girl is skinny. And duh, she says yes. Violins swell. The End.

Jeremy Gilbert is always a delight, but this movie wasn’t that great. Actress was so boring. I don’t know that I heard any emotion in her voice at all. There needs to be a better casting process, Hallmark staff! You don’t just need to be thin and have nice hair (although this girl had a very.severe.cut).  Anyway. My sympathies were with Paul the whole time – I am an indoor girl, as witnessed by the many Hallmark movies I watch when I could be outside. I don’t want to revisit this one, but I will, just so you don’t have to.