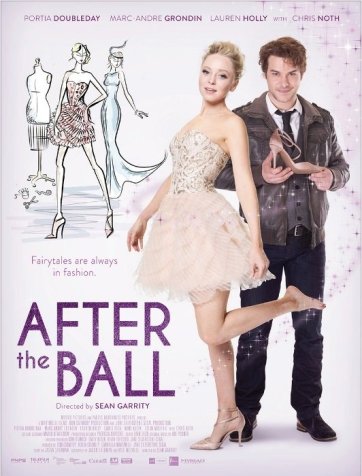 Another Cinderella Story! Plus, a movie that is actually filmed and set in Canada! For reals! There is so much to unpack in this delightful gem of a movie, I can’t wait.

For a Canadian movie, though, it starts with the classic overhead shots of New York City, where Kate Kassell is working on her fashion school graduation show. Her family legacy is a bit murky, apparently, her dad knocks off great designs for retail, like those people who come out with Oscar dresses 2 days after the ceremony. She can’t get a job to save her life, so off she goes back to Montreal, to her godmother’s second hand shop, After the Ball (see what they did there, it’s the title of the movie!) where her godmother and godmother’s Gay Best Friend (GBF) tell her to accept dad’s offer, and work at the family business. So off she goes.

It is established that Kate is a klutz when she walks into the front door. She is rescued by a handsome man with over-moussed hair, and when she finally gets inside, she meets with her stepmother, Lauren Holley with way too much hairspray, who is only too happy to give Kate a job, provided that she can get her to quit in record time. To this end, she enslists her daughters Tannis and Simone – they are both rather dim, but Tannis is truly special. These two girls are designers at this company, but they are not very talented, and they are very threatened by Kate, who is. They set her a task of reorganizing the accessory closet, which is sort of like picking lentils out of the ashes, but not by much.

There is also a gay hurricane of a guy named Maurice, and the over-moussed man is Daniel, who designs shoes at this company. He has a delightful French accent, with the sort of scruff that is very artfully applied. They hit it off right away, isn’t that great?

Kate’s dad shows up, and it’s Chris Noth, aka, Mr. Big, aka Mike Logan from Law & Order, except he’s wearing really ugly glasses. He states that he wants to reconnect with his daughter, but he is so disconnected from his business that he doesn’t seem to realize that his wife Lauren Holley is a terror and her two children are so untalented they make my stick figures look like Degas ballerinas. One wonders why he’s so checked out.

There’s some cute banter between Kate and Daniel – they’re both single, but Daniel is damaged (bad breakup) but before they can get to know each other any better, Lauren Holley and the two sisters frame Kate by leaking designs or something, and Daddy with the big glasses can’t handle disloyalty, so Kate is freaking fired and she doesn’t say anything. Geez, Kate, stick up for yourself!

That’s what godmother and GBF say, and before you can say way too much wine, they have hatched a plan to get Kate back into the design firm at Kassell – by dressing her up like a little gay man named Nate Ganymede. Shout out to the As You Like It reference! I played that role once! There is a boy-dressing montage AND a ‘walk like a boy’ montage, and then Kate/Nate, with all the confidence of a brash young man, talks his way into an interview and a test with Daddy Kassell to design something that will be amazing by Friday.

We also find out that Lauren Holley, for some reason that is really never explained, is cheating on her Mr. Big husband with Colin Frost (aka Colin Mochrie from Who’s Line Is It Anyway. Colin is Big’s biggest competition, and the one that seems to be copying Kassell designs (because Lauren Holley has been leaking them). Through all of this duplicity, Daddy Big still can’t figure out why his company is in the toilet.

Nate/Kate pulls out all the stops for her Friday deadline, and trounces the Stepsister’s “Touch of Glam” idea of animal prints and sparkles with a classic sheath dress with pockets. Honestly, it’s not setting the world on fire, but I’d wear it, and that’s saying something after all the horrendous costumes we’ve seen in these movies. Nate also wins the undying love of gay Maurice by calling the stepsisters SugarTits and tells them to f-off, basically. He invites Nate to go out dancing, and they get Nate to go too. It’s a lovely techno club, and with all the dancing and the alcohol, Kate/Nate puts the moves on Daniel, but since she’s dressed as a guy, it gets to be super awkward.

Next day, Maurice fixes Nate’s computer with spyware, and plants some decoy designs on it, just in case. These designs are from a collection Maurice designed called Alien Chic. It sounds delightful. Nate also gets Daniel to confess that he has feelings for Kate, and before you know it, Nate is racing off to change clothes at her godmother’s shop in order to transform from Nate to Kate. They go for a walk in the rain, and for some reason she is dressed like Lara from Dr. Zhivago, with the big hat and everything. Daniel invites her to the Fashion Week Ball, and yay! they have a date.

Mr. Big really likes Nate Ganymede, and tells him all about his life, how he fell in love with Kate’s mom because she was dressed like a 90s Goth Girl with red Doc Martens, and how he pushed Kate away because she looked just like her mom. That is just such a sucky reason, I want to say pooh on you, Mr. Big. Since Nate is designing the fall line, he must be at the Fashion Week Ball, and wouldn’t you know that we’re in for a big series of Mrs. Doubtfire moments? Because we are!

Lauren Holley steals the decoy Alien file, and hands it over to Colin Mochrie at the ball. She is overheard by Kate, who is doing one of her many quick changes. She managed to get that stairway moment that is in any movie with a ball scene, but no one noticed her but Daniel and they managed to have a nice dance sequence before it all went to crap. 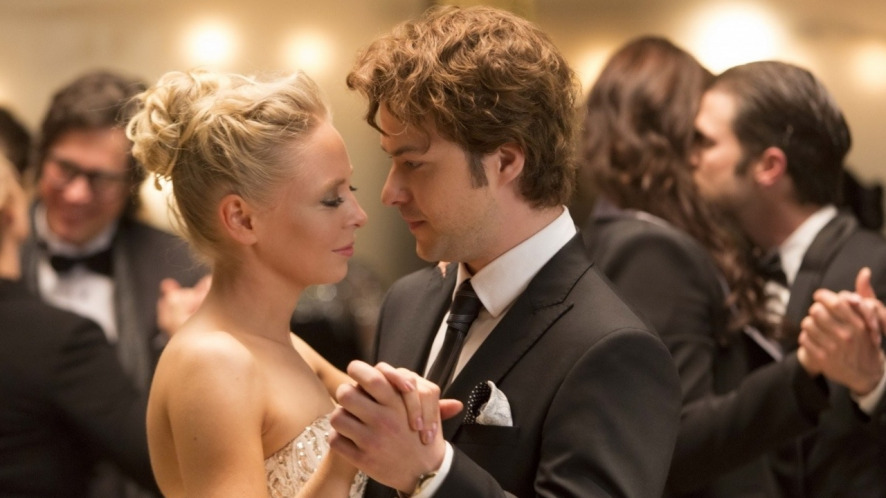 And by going to crap, I mean that Lauren Holley convinces Mr. Big Daddy that Nate was the breach to Colin Frost, and again, there is nothing that Kate/Nate can say that Big Daddy will listen to, because we all know that emotionally closed off men can only listen to big gestures that will happen at the end of the film. So as Kate/Nate runs away, Daniel sees her fall and lose her shoe – she’s dressed in heels and Nate’s trousers, so he figures out who Nate is, while looking pensively at her lost shoe.

Kate realizes the spyware on her computer proves that Lauren Holley is the culprit, so she enlists Maurice and Daniel to help Nate. But when Daniel shows up, he does the shoe thing of all Cinderella tales, and between kisses, he tells her he figured out she’s a girl. Yay! (Maurice is super bummed, because he really liked Nate. But oh well).

Meanwhile, Stepsisters have made their way confront Kate about her being a boy. They insist on being in on the whole thing to make Nate the scapegoat behind all the treachery, but luckily, they’re super stupid and Kate and gang can think circles around them. Kate gets them to dress up in the Alien Chic samples that Maurice made, and they are off to the press event!

Alien Chic is truly hideous, all neon green and glitter. The denouement happens, Lauren Holley and Colin are humiliated and Kate and Daddy are reunited. And the Kassell fall line is unveiled, “Girls Will Be Boys.” It’s a whole lotta menswear. Ugh. Not a good look, seriously.

Cut to 6 months later, Kate is happy designing at Kassell, has straightened her hair into an Ivanka Trump style (she had delightful waves before!) and she’s got her boy Daniel as well. Lauren Holley and daughters have to sort through the accessory room at Colin’s office, so justice! There are so many buttons.

So, this movie had it all – Cinderella, cross-dressing, cute boy with an accent, and lots of fashion. This is one that I would gladly watch again, so let me know when, as I’ll boot it up on Netflix, just so you don’t have to.