Before I get started, I have to say, that I am a Jane Austen fan (you probably figured that out by now). I re-read her works every year. I re-watch adaptations quite a bit – so much so that the last time I put the Keira Knightley P&P on, my husband had to say, “Didn’t you just watch this?” (The answer was sort of – it was on HBO and I caught the last 20 minutes.) I read all the Austen blogs, and I am currently daydreaming of a trip to Lyme Regis just so I can see where Louisa fell and hit her head. So it is with no little amount of glee that I have chosen today’s film, Unleashing Mr. Darcy, or, Pride and Prejudice, but with Dogs.

Lizzie Bennett here is Ms. Elizabeth Scott, who is a teacher at a private school, having issues with a douche student, with an even bigger douchier dad – bribing a teacher to get his son a passing grade in history. Imagine! She comes home to see her companion, a King Charles spaniel named Bliss, who has a dog show coming up. She’s got a mom who runs a bridal salon, and a sister who works there, too. Douche Dad gets her suspended from her job, right before her birthday. That dick. 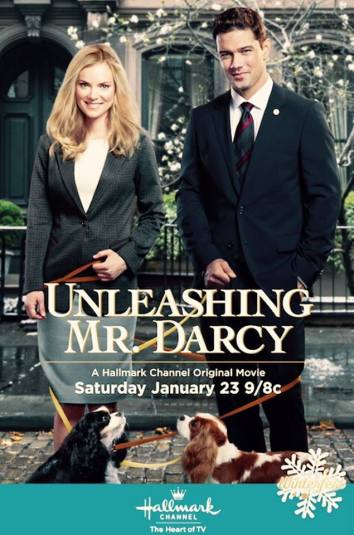 While she’s at the dog show, held in some kind of hotel ballroom, she runs into her friend Gabrielle, and she also spies new guest judge of the dog show, Donovan Darcy. This doesn’t sound as enticing as knowing Darcy has ten thousand a year, but it gets him introduced to the story. Lizzie thinks that D is arrogant, and Darcy says that the dog has “fine eyes.” He also speaks kind of like Douche Dad, so there’s no wonder that Lizzie doesn’t like him. But he likes her, or at least her dog, enough to get 2nd place in the spaniel category. I guess that’s a big deal.

They have a second meeting in a restaurant, where Lizzie manages to insult him in front of his sister, Zara, and then Darcy gets to see how her mother talks really loud and bemoans her daughter’s single state. Not really as bad as Mrs. Bennett, but it is implied.

Lizzie gets fired because DoucheDad lies, saying that she tried to extort money, rather than him trying to bribe her, and the rich people always win, apparently. So, as Gabrielle needs a handler in NYC for her terrier, Lizzie heads to the Big Apple – that looks like the Big Maple Leaf, because it is so Canadian. I know you’re not supposed to know this, or at least, not get distracted by this, but as someone who has been in and out of NYC for her entire life (no, not going to say how long that life is) there is no way that Manhattan looks like this pretend city. But at least, it’s not snowing.

Wouldn’t you know it, Gabrielle lives across the street from Donovan Darcy’s own brownstone! (Which, although called such, is not brown, nor made of stone). She’s not that thrilled to see him, and her big attitude about how arrogant rich people are spews out of her mouth before she remembers her manners. He’s not been as arrogant as the real Darcy has been by this time in the book – he never says anything about her being ‘tolerable,’ so Lizzie just has a lot of mental issues she’s letting cloud her judgement…hey, is that the Prejudice of the title?????

Donovan Darcy’s dog has puppies, so Lizzie and Gabrielle get to go visit. And when they get there, Miss Violet Darcy (Lady Caroline), played by very icy bitch actress who played the mom in Titanic. There is also a Caroline Bingley, only here her name is Felicity Robson, and her bitch face is also on pointe. Aunt Violet makes the very obvious statement that Donovan is going to propose to Felicity, just to make sure that no such thought of love would ever pop into Lizzie’s head.

Next dog show, where Darcy is the judge. Lizzie’s sister Jenna shows up to bond with her, and because we need a Jane/Bingley sub-plot – which happens very quickly, as Henry Robson asks Jenna out at the dog show. ‘Cause that’s how that happens in the real world. At this show, Lizzie wins. And Felicity and Aunt Violet are super-super mad, but show it passive aggressively.

At their victory picnic in a park that is so not Central Park, Lizzie finds out that Douche Dad is now planning on suing for ‘fraudulent accusations’ because it’s not enough that he got her fired. So, upset, she walks away, and who does she run into? Yup.  Darcy! But she’s still super upset at rich people, so she isn’t very nice to him, even though he is trying to be nice in his manly sweater.

Zara needs help with her history paper, and Lizzie helps, and Zara then has to stoke the fires a bit and tell Lizzie just how much she thinks her brother likes her, over Felicity. And then Lizzie finds out just how good a brother Donovan is, and feels a little guilty about all her attitude. Gabrielle, who loves being a matchmaker, sends Lizzie and the dogs to a dog spa (they have those?) where Darcy is also planning on going. Awkward meeting!

Paparazzi manage to get a shot of Darcy and Lizzie together at the dog spa, (apparently he’s so famous it makes the front page!) and now Aunt Violet has invaded Gabrielle’s house to threaten Lizzie with a ton of retribution if she doesn’t stay away from Darcy. This actress loves to chew scenery, but she’s so good at it, why quibble?  But Lizzie, still upset about the whole Douche Dad lawsuit, just wants a low profile, and now has decided to stay far away from Donovan Darcy. But…he’s judging the next dog show! What will she do?

They have another heated exchange, but she still manages to win the dog show. Miss Violet Darcy has to put her oar in, and she manages to get Lizzie banned from being a handler at the next dog show, because Darcy still has to be a judge. Lizzie gets a good moment about how being thrown out of the dog show is the same as being thrown out of her job at a cushy private school, and Darcy is pissed, you guys. Which sends him directly over to Lizzie, asking her to watch his puppies while he’s out of town. Is that romantic? I don’t know.

Lizzie and Darcy have a conversation about how he’s not engaged to Felicity, and he asks whether or not love is important in marriage, over teaming up with someone with whom one is well suited. Dude.

Henry and Jenna are having a delightful romance off-screen, and now he’s invited her to a “tennis tournament/ball” because that is a totally believable thing that rich people have. Jenna begs her to go with her, and so they are off to Connecticut! But guess whose house it is!!!! Pemberley, y’all.

Jenna tries to stick up for Lizzie with bitchy Aunt Violet, and that gives AV the ammunition to get Lizzie out of their world for good – because by name dropping the school Lizzie taught at, she’s gonna track down Douche Dad. But before that happens, there is a lovely shot of Darcy getting out of his pool in his little swim trunks. Not as awesome as the Colin Firth pond water thing, in my opinion, but whatever.

Felicity tracks Lizzie down and has another bunch of threatenings to give, and her side ponytail looks wretched doing it. 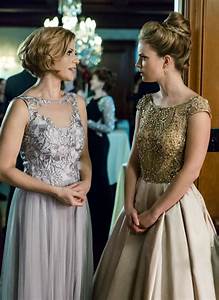 Ball Time!  Not as elegant as Netherfield, but the two Scott sisters do have nice dresses.

Darcy asks Lizzie to dance, and Aunt Violet is SUPER annoyed, but as soon as they hit the dance floor, she puts her plan into motion.

Felicity dances over with Douche Dad, and with one little bit of disdain, Lizzie runs away in tears, but not before Douche Dad tries to cause a bigger scene with her.

Darcy and Henry come to the rescue and kick Douche Dad out, while Aunt Violet and Felicity look on in delight at Lizzie’s distress. She tells him she doesn’t belong there, and that AV and F tried to sabotage her, and Darcy’s answer is to kiss her. Like this:

Is this a good thing, the hand on the face/neck during the kiss? Not sure. Also not sure why the guests at the party actually break out into applause when the two lock lips. Darcy also kicks Felicity and Aunt Violet out of his palatial estate. Even with all that, Lizzie leaves Darcy, and the ball, hiding in her room until she can get a ride home in the morning. Or, at least, until Jenna overhears Darcy saying unflattering things about her (Here’s where we get the ‘tolerable’ stuff!) and they run out of the house. They are almost at the cab when he bumbles out his awkward first declaration of love, which is no where near as insulting as Darcy’s first proposal to Lizzie in the book, but still, wasn’t great.

Darcy writes her a letter, which Jenna has to read to her. Lizzie refuses to believe that he’s in love with her, and she just wants to go home. Home which means working for her mom in the bridal store, until she magically gets her job offered back to her, because Darcy pulled some strings, but she turns it down.

Henry shows up in DC, so Jenna gets her happy ending. And after all of this, Lizzie finally gets her realization moment, and she leaves a tearful voice mail, ending with the fact that she’s in love with him, too. But he’s not answering his messages, and even though she’s moved back to NYC, looking for a job in a school there. He’s just not there.

Why is he not there? Because we need one more damn dog show scene in this movie.

They meet back up during the show, and have their big romantic kiss, but…who wins the dog show?!?!?!?!

The end. We will never know who wins.

So. One of the things I love about Jane Austen is how versatile her plots and characters are – they can be transposed to any place and time, including fake New York dog shows. One of the things I love about Pride and Prejudice is the fact that both characters really show growth throughout the book, with Lizzie going so far as to say that “she never knew herself” after reading Darcy’s letter. Both of them need to move forward if they are going to be together. This version doesn’t seem to need Darcy to do much moving on, and it seems that Lizzie here is the one who has to do all the growing. Is that because we have built up Mr. Darcy into such an ideal that we don’t think he needs any improvement? That’s not true, and he will be the first one to say that he had faults he had to fix in order to be happy, but he never would have noticed his faults if it hadn’t been for Elizabeth Bennett.

Anyway, this was a very faint copy of P&P, so I’ll leave the rest of the musings aside. If you want a great story, read some Austen, or watch a good adaptation. If you want to see a lot of dogs, you could watch this one – but I’ve already done that, just so you don’t have to.