So, I’m taking advantage of the snow day and catching up on the last Christmas movie on my DVR, just for you lucky people. I think I’ve saved this one, because it has to do with theater, near and dear to my heart, and I wanted to savor just how much it gets wrong. So let’s dive in to Christmas Encore, starring two people I’ve never heard of.

Charlotte (the blonde in the picture) looks to be a struggling actress, as it opens on a very sad audition, and she has a lot of motivational posters on her bedroom wall. She’s one audition away from the big one! She took an acting workshop with a guy who is now on a show called Thick or Thin. I think that will end of up being the guy in green in the picture, because of course.

Sassy Friend Alert! Rachel from college, who needs an event coordinator at her company, and she offers it to Charlotte. Job is in Chicago, though. How will that work out with her glamorous life in New York – that is so CLEARLY Canada after the few shots of Central Park and Wall Street.

Why is it that people wearing nametags ALWAYS forget that they are wearing them when people say their name, and they always ask “How did you know my name?” GAH! Charlotte meets a nice old guy in her restaurant who tells her that she should try out for live theater. Oh, and Charlotte re-reads A Christmas Carol every year, which she is doing on her shift at the restaurant – not like she’s got any tables to wait on, or anything.

Guy in the green shirt is Julian, a 5-year veteran of tv show Thick or Thin, who is back in town to do a production of A Christmas Carol at this theater, where nice old guy is the set designer. We also find out that Julian’s dad was the artistic director of the theater. So I’m glad that nepotism still works.

Julian wants to shake things up at the A Christmas Carol – he wants to do something inspiring, something real, something from, hey, in here (gestures with both hands to his chest like every self-important actor I have ever met. UGH!) And this guy is the hero of the story? Charlotte, I’m 14 minutes in and I think you can do better. (Oh, and she didn’t get the last commercial, so she agreed to try for the job in Chicago – Sassy Friend is on the case).

Charlotte and her roommate live in the most unbelievable New York apartment.

Julian is holding Open Auditions to find a little Christmas Magic to fill his cast. As he and Charlotte have some kind of history, he’s requested her to audition through her agent. And since she wants to stand out, she’s going to do her monologue as…SCROOGE! But since she has such history with Julian, she walks out of the audition before even monologing. (The history is that he improved during their camera test for Thick and Thin, and he screwed her up. As backstories go, that one is just…lame.) But after a short montage of her looking sad, she remembers her inspirational quotes and heads back to audition. Good for you, Charlotte!

Theater company has only one nay-sayer, a girl named Naomi (Stage Manager, I think), but ta da! Charlotte gets the part of Erlinda Scrooge. And you know there’s tons of Christmas magic in the air because there’s a cab right in front of the theater, just waiting for her – he even starts his engine for her!

Charlotte tells her mom, who has the total mom response of, “Oh, that’s great, but I guess that means you won’t be coming home for Christmas.” Way to guilt Charlotte over her big break, mom! Oh, and mom does not immediately offer to come to the play, so there’s that.

Enter Samantha, an evil brunette who shows up at Julian’s door. He tries to brush her off, but her very pronounced side hair doesn’t want to take no for an answer.

So while Julian’s dad was the Artistic Director of the theater, there is another man who is the son of the theater owner, and his name is Dennis Hayes, who sucks and is going to sell the theater because property is more valuable than art, or sentiment. So they’re going to give the theater the best send off to say good-bye. But the company is desolate – the theater company has been their family for, like, ever. So Charlotte just said, “You know what we need? A Christmas Miracle.” Don’t.we.all.

They are mounting a play in a week and a half and no one has done anything in rehearsal yet. But Julian and Charlotte have enough time to go on a date. Charlotte’s roommate points out that Julian’s tabloid-fodder with evil Samantha.  She just doesn’t want Charlotte to get hurt. But you know there is going to be some kind of misunderstanding and she’ll get hurt for a brief second before the happy ending, so I’m not worried.

The snow on the ground in this movie is so.freaking.fake. There is no way that streets in Manhattan look like this. As I said, today’s a snow day, and I’m seeing all the reports on the wonderful sanitation department who are on the job. I have total respect for those who shovel.

Sassy Friend’s boss just flew in to New York to interview Charlotte for a Coordinator position. You’d think they could just do this on Skype, or something. And Charlotte aces the interview, but dies inside.

Now they are decorating the tree, instead of rehearsing. And they can’t even do that well, although they are acting like they can.

Julian’s apartment has sporadic Christmas lights hanging from the walls. It’s super weird. They are decorating another tree in his apartment now.  It looks better than the one in the theater lobby. And Charlotte and Julian talk about Julian’s tabloid rumors, and Charlotte says she’ll never date an actor. Never say Never, Charlotte!

Sassy Friend calls during the one rehearsal they’ve had so far (it’s a dress rehearsal) to say she got the job! And apparently Julian talked to Samantha to blow the play up on Twitter, which Charlotte interprets as he got back together with Samantha, and is now in the hurt section of the movie.

For all that she works in a restaurant, it doesn’t seem that busy. Seriously, how does she pay her bills?

She doesn’t know if she wants to move to Chicago, and now Julian just got offered a role in a new TV series, but he doesn’t really want to do it. And Samantha totally kiss blocks Julian by showing up at his apartment while he’s trying to … fall in love with Charlotte? I don’t know, it’s so G-rated here on the Hallmark channel.

Opening Night! She’s going to move to Chicago after the holidays, because there’s nothing left in New York for her. And now Julian has the sad time.

Charlotte gives evil owner a picture of himself as a little boy, and now there’s going to be a change of heart in the selling of the building plan.

Charlotte can’t reach her mom on the phone. I hope that means mom is going to make the Opening Night performance. Which we don’t ever get to see – all this build up for a new version of A Christmas Carol and all we see is “God Bless Us, Everyone.” Ugh. And they just let the stage manager take a bow with the cast. That’s not a thing. How is she going to cue the lights?

Mom came to the show! And Julian paid for her ticket! And Sassy Friend came, and Charlotte’s not going to go to Chicago, after all!

The theater building is not going to be sold. Voila, Christmas Miracle. 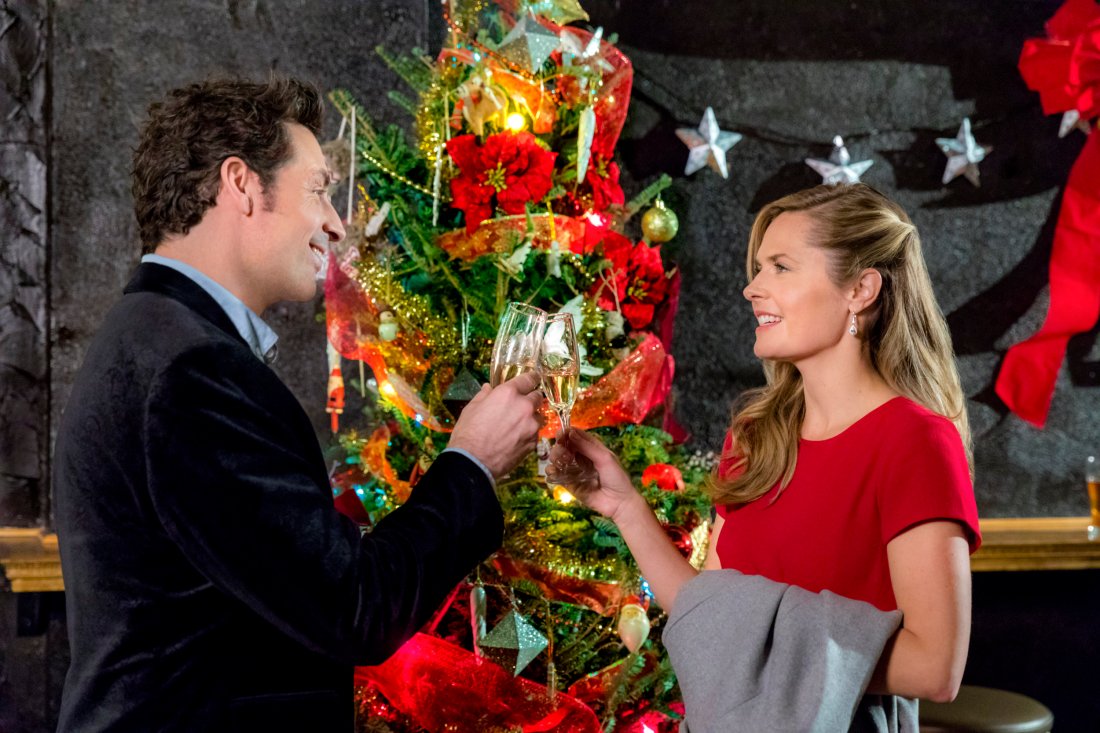 Charlotte finds out the truth about Samantha. Duh. Julian finds out that she’s not going to Chicago. Duh. 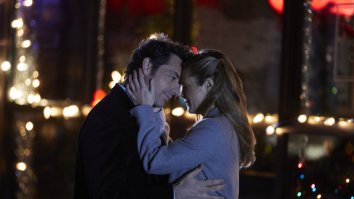 Her hard and fast rule about not dating an actor is broken. And she drags him outside to say basically say that one thing, so they can have the requisite kiss outside in the street.

They pan up to the Empire State Building, which is so clearly matted in to the street scene in Canada.

So.  Mildly annoyed at this movie, as I thought there would be more theater, and less scenes in a generic bistro. And this brings an end to the Christmas section of this blog, unless I need to revisit one of them throughout the year, when I need a Christmas Miracle. I’ll experience it, just so you don’t have to.