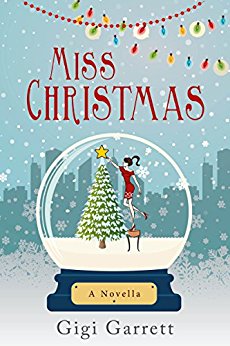 Amazingly enough, these Christmas movies don’t just jump out of screenwriters’ heads fully formed. Sometimes they are based on books, like today’s installment, Miss Christmas, starring some blonde girl and Marc Blucas, forever stamped in my brain as Riley from Buffy the Vampire Slayer. I have not read this novella, so I cannot vouch for how close this installment is to the written word.

Blonde girl is Holly, a.k.a. Miss Christmas, who runs the Radcliffe Center in Chicago – which is just like the Rockefeller Center in NYC, but different, and in Chicago. She handles finding the tree every year, and this year, a mishap to her chosen tree has her responding to a child’s letter from Klaus, Wisconsin, to find a replacement tree.

Klaus is a town like every other small-town-in-a-Hallmark-movie, where they have a Christmas festival, and everyone seems to be related to everyone else. I have already discussed my desire to live in this type of town for at least a week, so I will move on.  She has a meet-cute with a grumpy Marc Blucas, who plays Sam, the father of said child who wrote her the letter that brought to the small town.

Sam does not want to give up the tree. It was his mom’s tree, you seen, and his mom’s dead. But Miss Christmas doesn’t take no for an answer, and so the onslaught to get this tree uprooted and on the way to Chicago begins!

Corporate is threatening Holly’s job because they need a week to transport the tree and decorate, and so she needs to get this tree, y’all! Backstory for Holly – she grew up on a Christmas Tree farm, but had to sell it at 19 because she couldn’t handle it all. I think that was a wise decision. Backstory for Sam, he’s divorced and a single dad. They are both looking for a place called home. Will they find one by the end of the movie? (Aside, Sam’s kid, Joey, does not seem to be missing him mom, like, at all. He misses his grandmother something fierce, but mama? not so much.)

Media outs the fact that the Radcliffe Center has no tree a week before the tree lighting, and Holly’s boss texts in all caps her displeasure. The lack of tree has apparently decimated the Christmas Spirit in the middle of the country. Did you know a tree could do that?

In order to get Sam to agree (he’s the lone hold-out in his family about giving the tree away) Holly gets him to do all sorts of Christmas things in his small town – like a horse-drawn carriage, addressing Christmas cards, baking Christmas cookies, (fyi, some of these cookies look burnt), and cutting down their own tree. (I have never done this – is it fun? It doesn’t seem like fun.) Both Holly and Sam are having the feels for each other throughout the day.  But since her job is on the line, Holly is wasting a ton of time on this festive day. She is totally going to get fired.

Oooh, sneaky Sam is totally using the mistletoe to his advantage – but he’s completely kid-blocked by his son.

Apparently Sam’s family has an ugly-sweater tradition. And they loop Holly in on it – but seriously girl, you are TOTALLY getting fired – unless Sam capitulates and gives her the tree…and it’s a miracle!

BTW, they are in Wisconsin, in December, and hardly anyone has a coat on. That doesn’t seem to be physically possible, especially as, with all Hallmark movies, there’s a mild flurry in the air.

Holly has made the momentous decision to leave her job, because of the town of Klaus, and because of Sam’s baby blue eyes, and while she’s discussing it with her BFF/assistant, Sam does the thing that eavesdroppers do and misunderstands her conversation, and has a huge male hissy fit, telling her she can’t have the tree after all, because he thinks that she romanced him just for the sake of her job.  And I give this girl a ton of credit for NOT saying, “Listen, I am totally going to get fired if you don’t agree to this.” After she figures it out and puts him right, she then walks away, like a boss, with a back-up tree, that they totally could have gotten a few days ago, without all the drama.

20 minutes to go, and our main characters are miserable without each other. I think Marc Blucas totally needs to have a better career – I have always liked him and wish he could do better movies.

So Holly’s big romantic gesture is to bring all the Chicago decorations to Klaus, Wisconsin, and to decorate the still planted tree. And she’s quit her job. It’s all a surprise for Sam – who was “running errands” for like, the whole day. It’s not that big of a town, what was he actually doing? He shows up just in time for the tree lighting ceremony for the town, but not for the Radcliffe Center, so what did that tree wear? The whole plot spun around this damn tree, and it’s not even done on camera.  Remote satellite connection at the town of Klaus allows Holly, “Miss Christmas” to light one last tree.

I don’t think I’ve heard the words “Christmas Tree” more than in this movie. Hot damn, it was a lot.  And I learned that it is a symbol of hope, a symbol of magic, and embodies the spirit of Christmas. I learned all of this, just so you don’t have to.