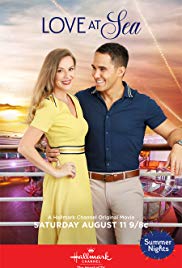 It’s been a bit of a busy day – lots of yardwork, and we’re all tired, and as it’s the end of summer, nothing is on. But rather than suffer through Say Yes to the Dress starring Omarosa – yes, that is an episode of that show – I’m off on a televsion cruise to experience Love at Sea, starring real life husband and wife, the girl from Spy Kids and the guy from the Nickelodeon Boy Band show whose title I don’t remember, sorry former Nickelodeon peeps!

Alexa Penavega stars as Liv, who’s waiting for her boyfriend, Ben, to propose to her on one of those back decks that’s also a pier somewhere in Florida. Her best friend, a YouTuber whose show is all about life hacks has the most unconvincing pregnant belly ever. Ben shows up, and he’s not feeling the champagne she’s offering, and he’s there to not propose, but to announce that he’s replacing her in her job as Events Coordinator at the hotel that her father created. So shut the hell up, Ben, Liv is outta there.

And we’re one year later. Best Friend has given birth to a boy, Tyler, and she’s off to some kind of cruise about her YouTube, and guess what? Best Friend needs an Event Planner, and Liv is on the case! There’s some kind of celebrity chef aspect to this cruise, I don’t get it, but basically we’re off to a 120 minute commercial for Royal Caribbean.

Carlos Penavega is Tony, the Assistant Cruise Director on this ship, who just got promoted as Cruise Director on a trial basis. His first cruise will be Liv’s Event Cruise! And it’s going to be a doozy, because Celebrity Chef Preston Something is like Gordon Ramsey before he started staging interventions.

Liv also finds out that her mom just had a bunch of plastic surgery and has a new boyfriend, and Liv is super, super, super not into the fact that her mom is dating someone, so she basically emotionally blackmails her mom into going on this Event Cruise. It’s Very Weird how much make up both of these girls wear.

Tony and Liv have a meet-cute on line waiting to board the ship. She’s very stressed, and he’s very ‘go with the flow.’ Will this work out well? Just once I’d like to see one of these movies where the guy is Type A and the girl is not. It would shake things up, just a bit.

Oh BTW, Mom’s Boyfriend shows up on the cruise – even though this whole thing was a ploy to get Mom away from Boyfriend! Liv is NOT HAPPY.

Liv’s stateroom has stairs in it. Is this a thing on cruise ships? How much will that cost?Liv and Tony have a stare down because she refuses to go to the safety drill. Seriously, Liv, you must have seen Titanic. Or Posiedon. She goes to the drill with a very bad grace, seriously pissed that Tony is the one with whom she’ll be working.

Ok, Tony is a royal pain. If you take a job while there is a project already 80% underway, why would you take the last 20% and just mess it up, all for shits and giggles? (Because that’s how this is written, and how he’s playing it.) BUT! Comeuppance will come, because he is going to be profiled by a magazine, and Liv knows the writer. Take that, Tony who nonchalantly adds things to Liv’s carefully, and no-doubt color-coded, schedule. Tony also doesn’t like the fact that the writer, Miles, and Liv have some kind of vibes going on.

Oh, we’ve also discovered that it doesn’t matter how much things cost, because Liv and her mom are “Grahams” which means filthy rich. Apparently old money in Miami, or something. Liv is feeling overprotective of mom and the new boyfriend. But this is all because of douchebag Ben from the first scene of the movie. But we also find out that Tony has some kind of battlescars from some girl named Eve. And we also see Liv see Mom’s Boyfriend talk to some girl on deck, and her suspicions seem confirmed. But I bet we’ll see that that woman will just be a former client and it’ll be fine.

So Tony came through for Liv’s cooking event – but she had to be done by 3 – and she totally wasn’t. They came to some kind of truce about the rest of the time on the ship, but then Tony sees Liv talking to Miles the writer, and there’s a bit of jealousy there under that v-neck sweater. Also, Best Friend YouTuber also does fitness stuff. And they get to wear matching shirts. I always french braid my hair in perfect french braids before I go to work out. Don’t you? 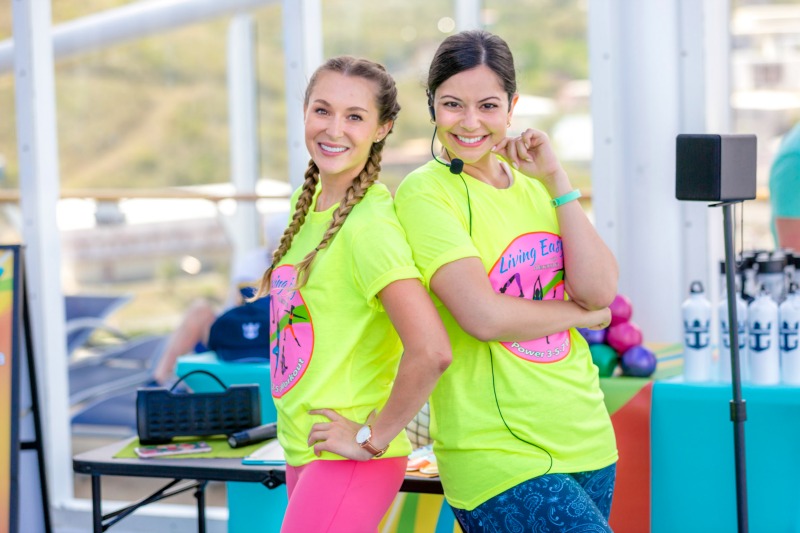 Liv got a massage and spent the entire time face down with her laptop underneath the table. That’s not how to massage, girl. But at least she got some kind of relaxation out of it, because the next thing to find out is that Celebrity Chef Preston Whatever didn’t show up in the airport to get on the cruise. Oh Crap! Cue Liv’s meltdown. And Tony says he’ll help her out, but his answer to solving her crisis is to take her to an observation deck to chill out. Tony, this stuff does not help super-stressed people. It’s like telling a working mom who is running late and can’t find her kid’s left shoe to calm down. That.Is.Not.A.Thing.People. But the scenery is pretty.

Tony’s other solution to the fact that the celebrity chef isn’t there is to offer coaching on that thing that looks like surfing but that is a pool. Tony’s wearing an unfortunate light tan suit and a pink shirt. It’s not a good look. But it saves the day for a bit. And it allows Liv and Tony to have a heart-to-heart about their exes, and their goals and aspirations, and it seems that everything is great – except Celebrity Chef Preston completely cancels and it’s not great. They’ve got an hour left in this movie to solve the problem.

I don’t get how Tony’s job as Cruise Director allows him to spend so much time with Liv. And their brilliant idea to save the day is to have a fake cooking show with Tony and Liv cooking. And we find out that Liv played “Anita” in West Side Story, and Tony played Bernado, and they of course have to go do the mambo because these two were also on Dancing with the Stars and have to do some kind of dancing. They have some major sparkage while they pretend to banter as different people – quite honestly, it’s weird. But her hair is on point. So good for her.

And for some reason, the next morning Liv is all sunshine and rainbows and throws her binder in the trash. Her self worth is no longer tied to the fact that her ex got her fired, that’s a lot of growth overnight! And to celebrate this new found freedom is to go zip-lining on the ship. Tony is the one instigating. Yet again, I wonder why he has so much time on his hands. 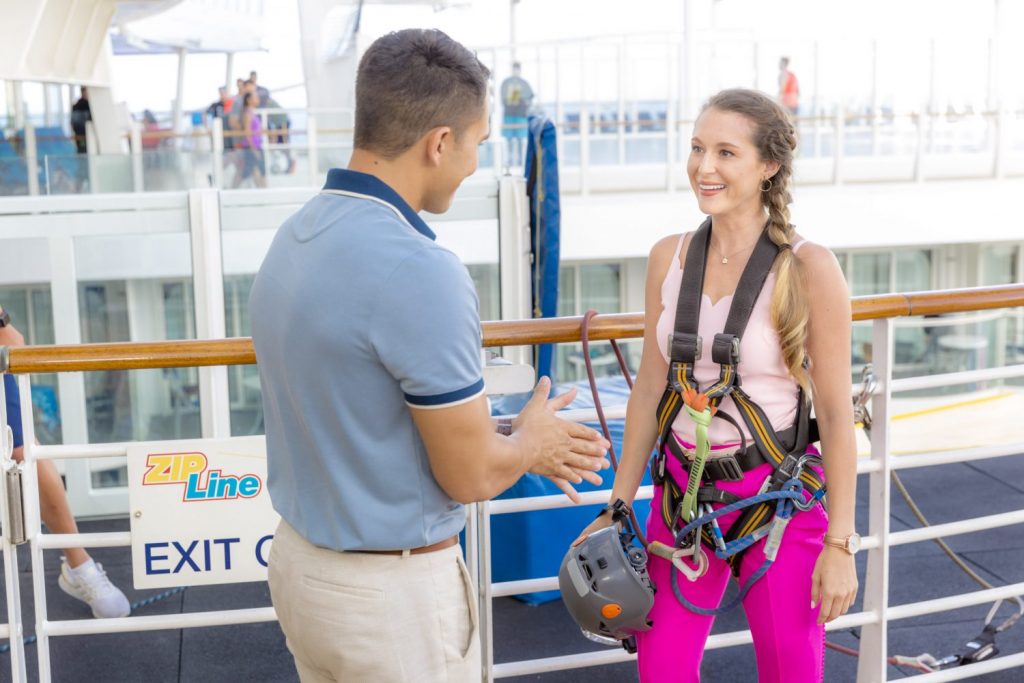 That was the least amazing zip-lining thing, ever.

Oh, snap, Liv saw Mom’s Boyfriend with that woman again! It’s time for a sit-down, Mom’s Boyfriend. Liv did have time to change her outfit, though. And we also find out that woman was his old law partner’s daughter. (Partial credit, me). They reach a detente and are all off for dinner.

The cook-off thing is weird, but Liv wins.  Tony then has to go off and do his real job. He invites them for a trivia night. Miles the writer invites himself for trivia night. Liv wins by knowing who Bette Davis played in All About Eve. Tony also has to improvise about the singing that night because the talent has laryngitis. What else can go wrong on this ship?

Best Friend quizzes Liv on the two guys who are baying at the moon for her – Miles vs Tony? Liv says that there’s not a spark with Miles.  And at the singing event – Tony Sings!!! And he sings “You’re Just Too Good To Be True” a romantic staple since Heath Ledger ran around on some bleachers in 10 Things I Hate About You.  Oh, and Miles sees the lovey-dovey eyes between Tony and Liv and is not happy.

But after the songfest, Liv walks the deck with Miles, and now Tony gets the sad eyes before he realizes that he can’t give up the sea for any woman because Tony is a grizzled old seadog. Miles asks her out on dry land, and she doesn’t answer – but she does go for another massage where she doesn’t use her laptop.

How many outfits did Liv bring with her on this cruise? I don’t think I have that many clothes. But Tony doesn’t mind her fluttery ruffles because they have a nice smootch in that high deck where he likes to think. But we have 25 more minutes to go – what’s up with that, Hallmark?

There is a cricket in my basement. I am not going to go look for it.

Liv is now freaking out that she kissed Tony, and best friend is freaking out. And Liv is wondering if she liked him because he was unavailable, and mom says “find out what makes her happy.” So she’s got to make a decision, and Miles is making it easy for her, because he’s not listening to her, and is being a prat. He asks Liv to get off the ship with him “together” and Tony overhears, and walks away in The Sad Times. But not for long, because he gets the contract to be the Cruise Director. Huzzah! 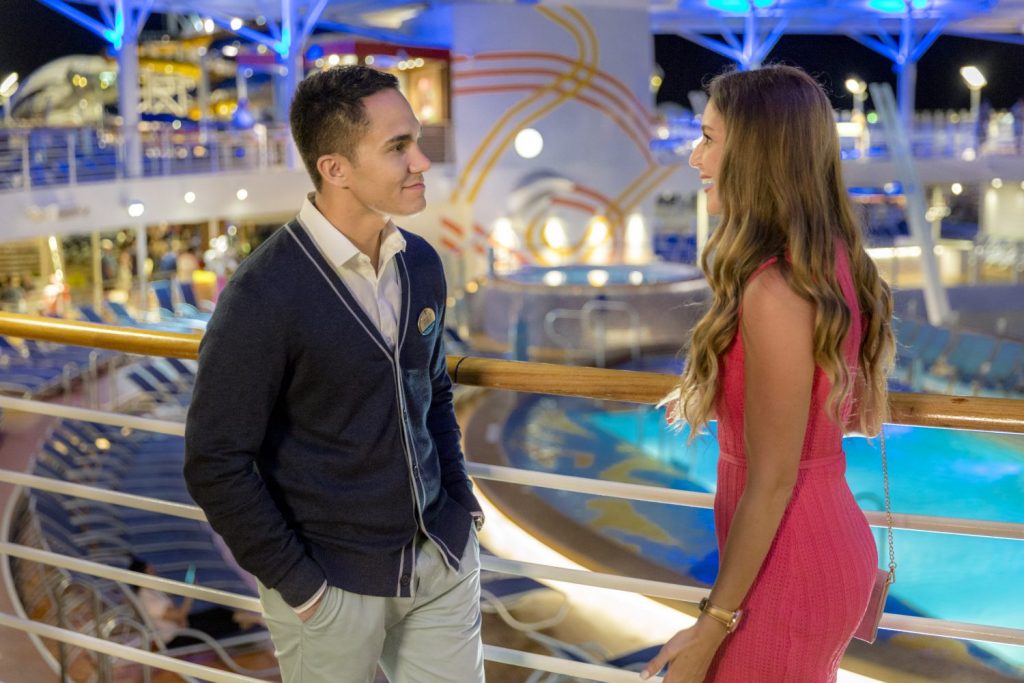 Last night of the cruise – I spoke too soon, Tony’s not out of The Sad Times. He brings up Miles to her, and she’s not having it, but walks off with dignity.

There must have been an unspoken rule with one of the photographers on the ship, because all she did was take pictures of Tony and Liv together. But that seems to give him an idea, and off her runs to find Liv – and her stateroom has a freaking piano in it. WHAT THE HELL IS GOING ON HERE!!?!!?!?! 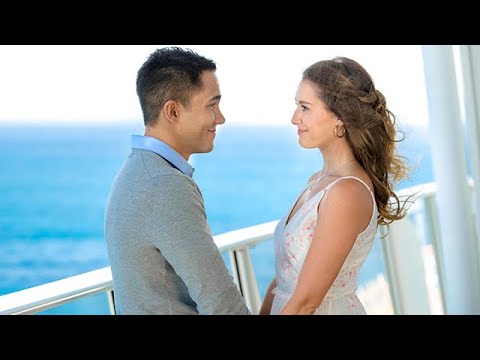 He’s racing around the boat to find her – and she’s right there, waiting in another flowy dress and way too high stacked espadrilles that don’t look like they fit. He asks her to stay with him – and be the “group coordinator” on the ship. So they get to have a lot of picturesque kisses while facing the sunset. Good for them. And we’re done.

These crazy kids have found a great racket – working together and getting to go to lovely places while they do so. They have nice chemistry, and this movie wasn’t full of so many cliches that it was unbearable. So good for everyone. Watch this one, if you want. Or not. I did, just so you don’t have to. 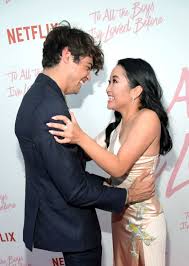 PS – Go watch To All The Boys I’ve Loved Before on Netflix. So freaking adorable. Look how cute these two are!  For reals – this movie is the best.